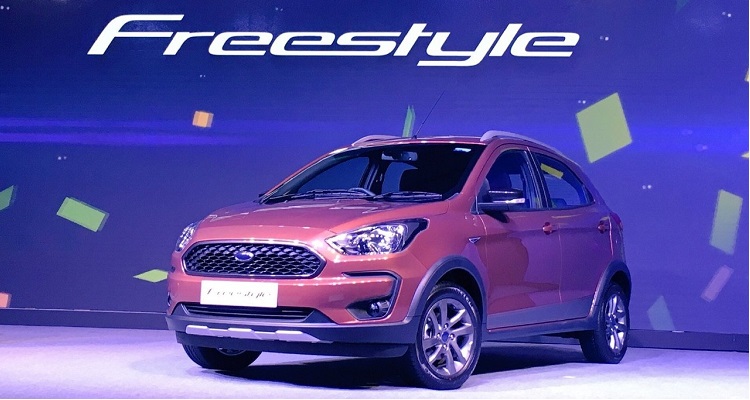 Ford has launched its much awaited cross-hatch the Freestyle in India. The Freestyle has been launched at starting price of Rs. 5.09 lakh. The Ford Freestyle is available in four variants Ambiente, Trend, Titanium, and Titanium+. All four variants is available in petrol and a diesel engine optiions. Price range for petrol variants starts from Rs. 5.09 lakh and goes up to Rs. 6.94 lakh while price range for diesel variants starts from Rs. 6.09 and goes up to Rs. 7.89 lakh. The Freestyle is a Figo-based cross-hatch launched today in India.

Based on the Figo hatch, the Freestyle has its ride height increased by 160mm to 190mm and gets larger 15-inch alloys. The Freestyle comes with the functional roof rails, body cladding and skid plates. Importantly, the Freestyle’s new face will also be the face of the upcoming Figo hatchback and the Aspire compact sedan. Inside the cabin the Figo dash has been redesigned to hold a 6.5-inch touchscreen and has a chocolate brown and black colour theme.

Mainly The Freestyle will compete with the Hyundai i20 Active.