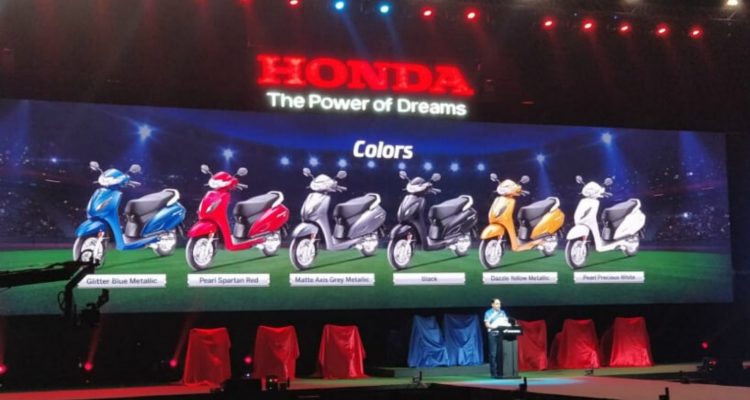 The Honda Activa launched sixth-generation Honda Activa 6G in India. The new Honda Activa has been launched at a starting price of Rs. 63,912 (ex-showroom, Delhi). The first Honda Activa was launched in 2001 and now it enters its 20th year. Honda Activa is India’s highest-selling scooter. The Activa 6G gets some major upgrade out of which the BS6 emission norms is main. The outlook of the scooter has also been revised extensively. The company promises lower emissions, improved fuel economy in the new Activa. The Scooter also hosts a bunch of new features as well.

The new Honda Activa 6G comes with a revised LED headlamp, redesigned front apron, and tweaks to the rear. The side panels get minor revisions as well to keep up with the rehashed styling. Overall the new model looks almost similar to the existing Activa 5G. The scooter gets a bunch of features including a semi-digital instrument console, multi-function key with a remote hatch opening, and more. The Activa 6G gets a longer seat, longer wheelbase and even increased floor space. The scooter will be available in two variants – Standard, and Deluxe. The new Activa 6G will be available in six colors.

The new Honda Activa 6G is powered by an updated 109 cc single-cylinder engine. To meet the stringent emission norms and for smoother performance and high-efficiency carburetor has been replaced with the fuel-injection. The engine generates a max power of 7.68 bhp at 8,000 rpm, and a peak torque of 8.79 Nm. The new Honda Activa 6G is the latest model from the manufacturer to meet the BS6 norms after the Activa 125 and the SP 125.

The model also comes with the ACG motor that first debuted on the Activa 125 last year. Honda’s new technology Enhanced Smart Power (ESP) has also included to reduce friction inside the engine. It also includes an offset cylinder for better refinement, a compact crankshaft, optimized piston, and improved combustion. The company claim that new Activa 6G is 10 percent more fuel-efficient than the Activa 5G. Bookings for the new model are open and deliveries will commence from the end of January and early February.