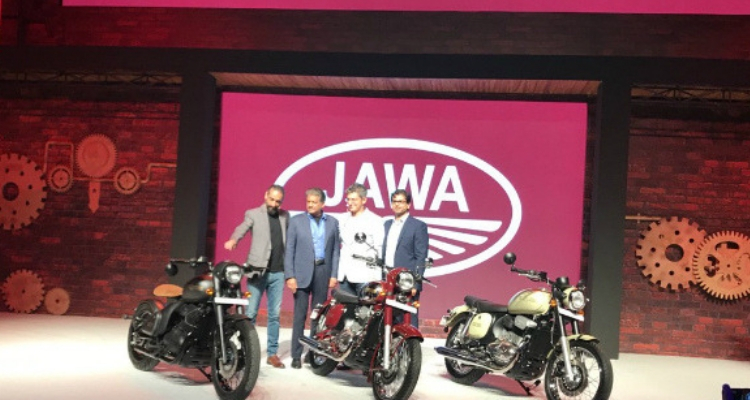 The Jawa motorcycle is a retro-styled cruiser powered by 300 cc which will give a direct competition to Royal Enfield’s 350 cc range. The Jawa 300 will refresh your old memories of 1970-80s when Jawa motorcycles ruled the Indian roads. The bikes will be advance in terms of mechanics.

The Jawa brand has been revived by Classic Legends Pvt. Ltd. which is a subsidiary of the Mahindra Group, which owns 60 percent stake in the venture. The remaining holding belongs to entrepreneur Anupam Thareja and Boman Irani, son of Rustom Irani, the founder of Ideal Jawa.

The new Jawa motorcycles get a better build, more power and lower center of gravity in comparison to old bikes. The round headlamp, fenders and bulbous fuel tank grab the focus of the period look.

The bike is powered by a 293 cc single-cylinder, liquid-cooled engine which generates a max power of 27 bhp and a peak torque of 28 Nm. The engine is mated with a 6-speed gearbox. The engine used in Jawa is BS VI which comes with a catalytic converter. The bike comes with a 280 mm disc brake at front and a 153 mm drum brake set-up at the rear. The bike offers a single-channel ABS as part of the braking setup.

The weighs of the bike is 170 kg and the seat height is 765 mm, and it is one of the lowest in class. The Jawa comes with a wheelbase of 1,369 mm and fuel tank capacity of 14 liters. The Jawa Perak uses the same engine as the Jawa and the Jawa 42, but gets a bigger bore, displacing 332 cc and it generates a max power of 30 bhp and a peak torque of 31 Nm.

The Jawa will be available in 3 colors including Black, Grey, and Maroon while the Jawa 42 will have six colors which are Halley’ Teal, Galactic Green, Starlight Blue Lumos Lime, Nebula Blue and finally Comet Red.