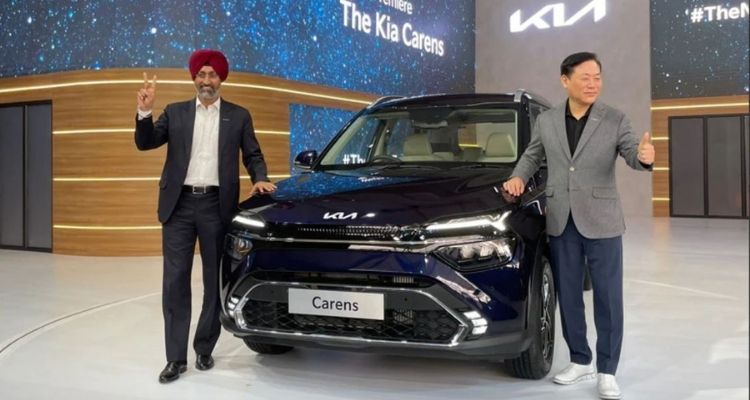 Today the Kia uncover the most popular MPV Carens. The company already sold its compact MPV with the name of Carens in Korea from 1999 to 2018. Globally it was more popularly known as Kia Rondo. Now the company has taken the Carens name again and India is the first market to get it. The Kia has launched Carens with the focus target of modern Indian families and so it has a straight roofline, a fairly long footprint, and an upright stance.

The Carens is based on the Seltos platform. The exterior comes with aggressive treatment with signature LED DRLs, a split lighting setup, sleek LED headlamps, and a muscular bumper with large air intakes. The bold character lines, sporty alloy wheels, and roof rails give a robust appeal to the car. The rear section gets sharp-looking wraparound LED taillamps connected by what looks like an LED strip. The sculpted tailgate and an aggressive rear bumper too complement the design pretty well.

Inside the cabin, the design is quite minimalist and the dashboard with very few buttons and horizontal air-con vents looks very flush. It is also decorated with a three-spoke multi-functional steering wheel, and features like wireless charging, Android Auto and Apple CarPlay, auto climate control, a 10.25-inch touchscreen infotainment system, with UVO connected car tech, ambient mood lighting, spotlights, rear table trays, and sunroof among others are on board. Safety features include six airbags and all-four disc brakes as standard along with other drive assist features like electronic stability control, rollover mitigation hill descent control, and hill assist among others.

The company has not reveal the technical details of the new Kia Carens yet. But we expect it to share its powertrain option with the Seltos. So it is likely to get a 1.4-liter, four-cylinder turbo petrol, 1.5-litre, four-cylinder naturally-aspirated petrol and the 1.5-liter, four-cylinder diesel engine options. While six-speed manual transmission will be standard, the turbo petrol will be offered with the option of a seven-speed dual-clutch automatic transmission (DCT) and the diesel will be available with a six-speed torque converter automatic gearbox.