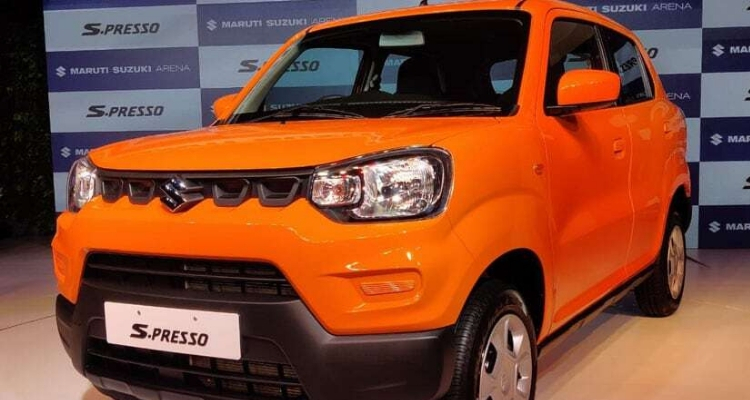 Today the Maruti Suzuki has launched its much-awaited mini SUV in India. The Maruti Suzuki S-Presso has been launched at starting prices of Rs. 3.69 lakh (ex-showroom, Delhi). The all-new S-Presso has been developed at the platform of Maruti Future S concept, which was showcased at the Auto Expo last year. In terms of look, the all-new mini SUV gets tall, upright stance, decent ground clearance, and bold design. The front resembles with Vitara Brezza with a muscular bumper along with a sleek, chrome-laden grille and square-ish headlamps.

Inside the cabin, the S-Presso comes with an all-black interior and the dashboard gets body-coloured inserts, in the top variants. The most attractive highlight is the round centre console, which is inspired by the Mini Cooper. Cabin is equipped wit the digital instrument cluster along with Maruti’s SmartPlay touchscreen infotainment system with smartphone connectivity. The centre console also gets control for the AC and power windows. It also gets a USB port and a 12 V socket. The top variants of the S-Presso come with safety features including dual-airbags, rear-parking sensors, and speed sensing door locks. The upcoming S-Presso will be offered in four key variants – Standard, LXI, VXI, and VXI+, and these further have 10 options based on trims and transmission choices. The variants include – Standard, Standard (O), LXI, LXI (O), VXI, VXI (O), VXI+, VXI AGS, VXI (O) AGS, and VXI+ AGS.

The Maruti’s new Mini SUV is powered by a 1.0-litre petrol engine from the Alto K10 hatchback which generates a max power of 67 bhp at 5,500 rpm and a peak torque of 90 Nm at 3,500 rpm. The engine is BS6 compliant and mated to a 5-speed manual gearbox along with an AMT option as well. The S Presso micro SUV is built on Maruti Suzuki’s Heartect platform, which already underpins the WagonR, Swift, Baleno and few other models in its line-up.