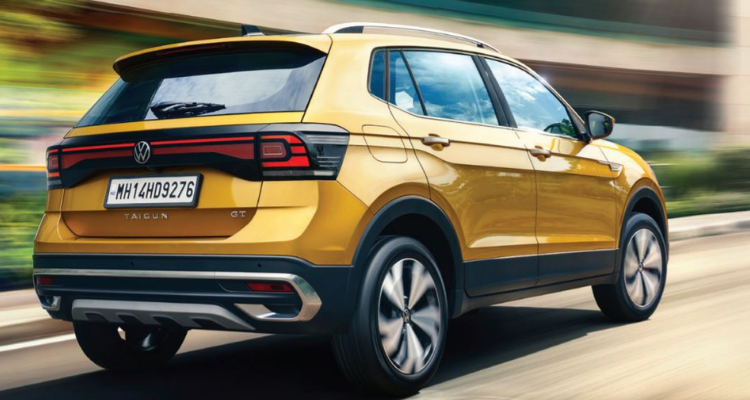 Volkswagen has launched its Skoda counterpart – The All-New Volkswagen Taigun. Taigun is a mid-ranged Mini-Suv with a compact but clique eye-catching design. It comes with loads of features and german build quality.

Volkswagen has strongly entered the Mini-SUV market and is planning to put a great impact on the sales of its Korean rivals. The Volkswagen Taigun is the cousin of Skoda Kushaq and borrows a lot of features from it. It only comes in two different petrol engines.

The Volkswagen Taigun is made on the same platform as the Skoda Kushaq. Hence, it has a lot of design elements in common such as the door lines, roof rails, rearview mirrors etc. But, despite the similarities, Volkswagen has given Taigun a very distinct design.

It is a smaller car as compared to its rivals. But, it has enough wheelbase that 4 passengers can sit comfortably in the car. On the sides, it has black cladding running throughout the car and chrome roof rails which can hold up to 50kgs of weight. Further, In the GT line, there are green stripes on the sides.

The dashboard design of the Volkswagen Taigun is quite impressive and quite similar to the Skoda kushaq except the screen is integrated and not floating. The instrument cluster is digital and offers a lot of features but is small as compared to its rivals. The car has a lot of hard plastics everywhere.

The All-New Volkswagen Taigun is offered with two engine options-

The All-New Volkswagen Taigun is not as feature-loaded as its rivals. But, it still gets a bunch of cool and first in class features such as –

There is ample rear-seat space for 2 passengers. The front passenger seats are scooped out for more space in the rear. The headroom in the room is decent for tall passengers.

There are twin cupholders and a key holder near the front armrest. The dash gets a 12v socket. The glove box is decent-sized and has a cooling function. Further, the door pockets are quite big and there are additional twin cupholders in the rear armrest.

The boot is not that huge as compared to its rivals as the car is smaller in size. The boot space is 350L according to Volkswagen and can hold enough luggage for a family on a weekend trip.

The All-New Volkswagen Taigun drives amazing which is no surprise as it’s a Volkswagen car.

It has a really good steering wheel and ride-handling balance. The suspension is customized for Indian roads and work very well.

The 1.5L petrol engine is the best engine in this segment and by far the most fun to drive. It has a linear punch throughout and massive power output.

Further, the seats are comfortable and the riding position is very commanding as you sit high in the car. The suspension is stiffer than other Volkswagen cars. Hence Taigun handles bumpy roads very well. There is almost no body-roll on curvy roads even at higher speeds because of the stiffer suspensions. The shifting with paddle shifters is also very smooth.

The Volkswagen Taigun is a german car and the brand name says it all about safety. German brands are known for their solid strong cars and Taigun is no different.

It is not rated on the Global Ncap yet. But still is a much safer car as compared to its Korean rivals.

The Taigun comes with ESC(Electronic stability control)standard on all variants. It gets ABS EBD and traction control. All variants get the front disc and read drum brakes.

The GT+ variant gets 6 airbags while other variants get 2 airbags.

Taigun is equipped with multi-collision brakes and hill hold control.

The main competitors of the Taigun are Hyundai Creta, Kia Seltos, and Its cousin sister Skoda Kushaq.

Is It Worth Buying

It is worth buying for driving enthusiasts. The 1.5L petrol engine is the best in class and no other car except the Skoda Kushaq will offer such a great driving pleasure.

It is less feature-loaded as compared to its rivals like the Kia Seltos and Hyundai Creta. So if you are looking for a safe good-looking car with an amazing engine and you can compromise on some features you should consider Taigun as your option.