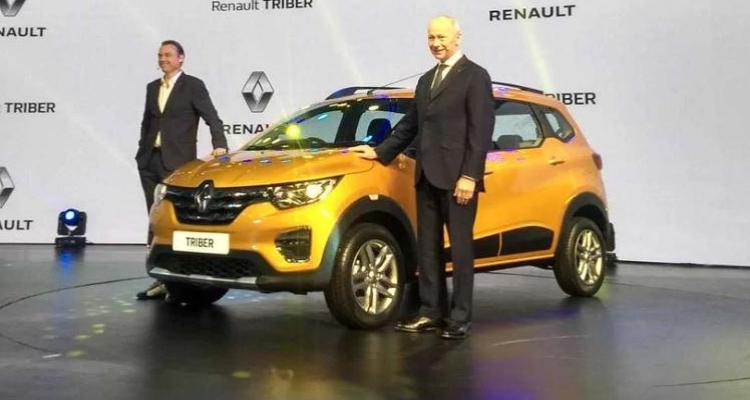 Finally Multi Purpose Vehicle the Renault Triber has made its global debut in India. The all-new MPV is based on the CMF-A platform which already tested in Kwid but this time it offers seven-seater car under the four-metre mark. The new Triber comes with a completely new design language to make the car more spacious. The Triber will give the competition to the rivalas including Datsun GO+ and upcoming compact seven-seater from Maruti Suzuki. Renault adjusted a third-row seating and compare the Triber with the B-segment hatchbacks.

Speaking on the global unveil of the Renault Triber, Thierry Bollore, CEO of Groupe Renault said, “India is a key market for Groupe Renault. We are still young to India, yet our ambitions are high in line with our “Drive the Future” strategic plan: we aim at doubling our sales by 2022. For that reason, we are bringing Renault Triber, another breakthrough concept, targeted for Indian’s core market. Renault Triber was conceived, developed and produced in India, for Indian customers first, before we take it to the world. It is a real game-changer.”

The design language of Triber has been evolved from the Kwid. The appearance of the new car is taller and more suitable for urban. The chrome grill is not exactly same like previous Renault models but looks a bit similar to that on the upcoming Duster facelift. The Variant showcased gets the body cladding on the sides and the roof rails and alloy wheels along with faux skid plates.

The Renault Triber measures 3990 mm in length, 1739 mm in width, 1643 mm in height and has a wheelbase of 2636 mm. The model ground clearance stands at 182 mm, while the kerb weight is 947 kg. The new MPV comes with safety features including four airbags (dual front and side), speed limit alert, along with the rear parking sensors, three-point seatbelts for all rows, and reverse camera.

The Renault Triber is powered by a 1.0-litre three-cylinder petrol engine with dual VVT system which generates a max power of 71 bhp at 6250 rpm and a peak torque of 96 Nm at 3500 rpm. The engine is mated to a 5-speed manual and AMT options. The MPV comes with a 15-inch alloys on the top variants, while the mid and base trims will get 14-inch wheels wrapped in Ceat tyres. The Triber will go on sale later this year.

Without the third row, the boot capacity is 625 litre. The second row is sliding for the purpose to passengers to come in and go out. If only five passengers are travelling you can detach the third row to increase cargo space. The model also comes with an 8-inch touchscreen infotainment system with Apple CarPlay and Android Auto, navigation, USB and Bluetooth connectivity, HVAC unit with pillar-mounted rear air vents. 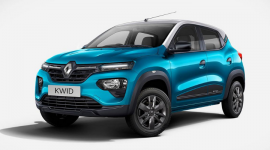 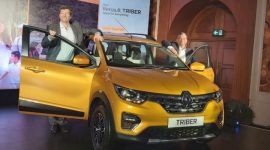